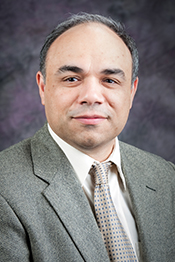 Behrooz Mirafzal received his bachelor’s degree from Isfahan University of Technology, Isfahan, in 1994, and his doctorate from Marquette University, Milwaukee, Wisconsin, in 2005, all in electrical engineering. Prior to his doctoral studies, he was a power engineer, as well as a lecturer, with several academic institutions in Isfahan. From 2005-08, he was with Rockwell Automation/Allen-Bradley, Mequon, Wisconsin, first as senior development and then promoted to a project engineer, where he was involved in research and development related to magnetic design and high-frequency reflected wave phenomena in motor-drive systems. During the time he was employed at Rockwell Automation, he was an adjunct faculty at Marquette University, and a lecturer at the University of Wisconsin Milwaukee. From 2008-11, he was an assistant professor at Florida International University, Miami, Florida. In 2011, he joined Kansas State University and established the power electronics research laboratory. He is currently a full professor in the department of electrical and computer engineering at Kansas State University.

Professor Mirafzal is the the author a textbook entitled "Power Electronics in Energy Conversion Systems" published by McGraw Hill, author or co-author of more than 100 IEEE transactions and IEEE international conference papers, and holds four U.S. patents. He is the recipient of a 2014 NSF CAREER Award, a 2012 NSF EPSCoR First award, the 2012 IEEE-PES Transactions Best Paper Award, the 2008 IEEE-IAS Transactions Second Best Paper Award, and an Innovation Award from Rockwell Automation in 2006. He has served as an IEEE senior member since 2007, an associate editor of IEEE Transactions on Industry Applications since 2011, the technical co-chair of the IEEE IEMDC International Conference in 2009 and the technical co-chair of the NAPS Conference in 2013. He is an active member of IEEE Industry Applications, IEEE Power Electronics, IEEE Industrial Electronics, and IEEE Power and Energy Societies.