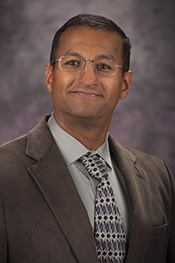 Professor Bala Natarajan received his Bachelor of Engineering in Electrical and Electronics Engineering from the Birla Institute of Technology and Science, Pilani, India in 1997. From January 1997 to June 1997, he worked as a systems engineer at Daimler Benz Research Center in Bangalore, India. In the fall of 1997, he started his graduate work at the electrical engineering department at Colorado State University in Fort Collins, Colorado, and received his doctorate in 2002. In the fall of 2002, he joined the department of electrical and computer engineering at Kansas State University as an assistant professor. He was promoted to associate professor in 2008 and professor in 2013. He currently holds the Clair N. Palmer and Sara M. Palmer Electrical Engineering Professorship and is the director of the Wireless Communications and Information Processing (WiCom) group. In his tenure at K-State, he has held multiple administrative positions within the department and across the university including serving as the interim director of International Research Development and Graduate Recruitment for the College of Engineering from 2014-15. In 2013, he served the State of Kansas as the sector lead for communications as part of the Critical Infrastructure Protection.

Natarajan’s core scientific research expertise spans theoretical domains of statistical signal processing, stochastic and mathematical modeling, and optimization and networked control theories. However, the scope of his research is quite expansive and includes applications to wireless communications, sensor networks, cyber physical systems (e.g., smart grid), biomedical systems and complex network science. His early work on carrier interferometry orthogonal frequency division multiplexing (OFDM) and discrete fourier transform (DFT) based coding in code division multiple access (CDMA) systems is part of the mobile technology standard - 3GPP Release 10 (and later releases) uplink specifications. His research group developed a new online trellis search based limited feedback polyphase precoding as well as spreading code design strategy that received widespread news coverage due to its potential for increasing capacity of wireless systems. His group has also made significant contributions in the area of energy aware distributed detection and estimation in sensor networks. Specifically, a novel sensor deployment strategy based on optimal control theory principles was the first work to present a rigorous framework for sensor placement problems that were previously addressed based on heuristics. Other contributions in the sensor networks arena include understanding the fundamental limits of cooperative optimization, filtering in extremely energy constrained systems (e.g., networks with energy harvesting nodes), and identifying ways to manage power and rate resources to operate effectively. Finally, Professor Natarajan and his group members have recently addressed a few long standing problems related to centralized and distributed networked estimation and control of large spatially distributed cyber physical systems (CPS). Applying these fundamental results in the context of a smart grid has led to many impactful algorithms.

Currently, Professor Natarajan and his group’s focus spans three areas. In the wireless communication arena, the group is developing better interference models for 5G mmwave communication systems along with signal processing strategies to deal with non-gaussian noise in such systems. In the CPS arena, the group is investigating networked estimation and control problems related to stochastic hybrid systems with applications to smart grid. In the biomedical signal processing area, the group is currently engaged in quantifying sleep quality in children with Autism spectrum disorder by detecting motion/restlessness based on data from a smart bed system. Additionally, the group is also investigating stochastic models, estimation and control problems in ablation procedures for cancer treatment.

Natarajan has authored and/or co-authored one graduate textbook, four book chapters, over 60 journal papers and over 110 conference papers. His research group has presented over 100 talks at national and international conferences, universities and workshops. Professor Natarajan has directed 13 completed doctoral dissertations and 22 completed master's theses. He has received multiple best paper nominations and awards, and was the recipient of the Dean’s Award for Excellence in Research in 2014. Natarajan is a senior member of IEEE and currently serves as the editor of multiple journals including IEEE Transactions on Wireless Communications. He also served as associate editor of European Transactions on Telecommunications from 2014-16. He also serves as the representative of IEEE Vehicular Technology Society on the IEEE Smart Grid R&D committee and the IEEE Council on RFID. In 2016, he was selected to serve as the vice-chair of the steering committee for the IEEE Journal of RFID. Since 2013, he is a member of the advisory board of Indo-US Collaboration for Engineering Education (IUCEE), which is an organization focused on enhancing the quality and global relevance of engineering education and research through cooperation.