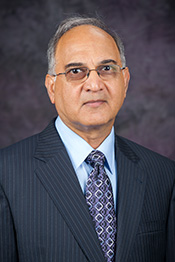 Anil Pahwa he has been a faculty member in electrical and computer engineering department at Kansas State University since 1983. He served as the graduate program coordinator from 2000 to 2004 and department head from 2004 to 2007. He spent a year on sabbatical from 1999 to 2000 at ABB in Raleigh, NC. He was selected by the National Academies for the Jefferson Science Fellowship in 2014 to serve as a senior scientific advisor in Economic Policy Office of East Asian and Pacific Affairs Bureau of the U.S. Department of State.

Pahwa is the lead faculty member in electrical power and energy systems at Kansas State University. His research focuses on reliability, automation and optimization of power distribution systems. Specifically, his research has provided innovative and practical solutions for the application of advanced communication and cyber technologies for automation of distribution of electricity to customers, and large-scale integration of renewable energy resources in the system to decrease dependence on fossil fuels. These solutions include testing of field equipment, evaluation of distribution automation projects, novel approaches for quick restoration of distribution systems following extended interruptions, design of distribution systems to minimize stress on equipment during restoration and methodologies to increase utilization of renewable resources. A recent NSF-Cyber Physical Systems (CPS) project directed by Pahwa, focused on investigating holonic multi-agent system (HMAS) architecture for operation of power distribution systems with massive deployment of consumer-owned rooftop solar power generation. A current NSF-CPS project led by Pahwa is directed towards implementing systems with thousands of active consumers who own solar PV generation, and have an ability to buy and sell electricity by proactively adjusting their electricity demand in response to changing electricity prices. Due to its national significance, this project was featured in a September 2015 White House press release on the Smart Cities Initiative.

Pahwa has collaborated with faculty members within Kansas State University as well as other universities for research leading to his engagement in 38 funded projects with about $8.8 million in total funding. Of these projects, he has been the lead PI on 28 projects with total funding over $3.0 million with 12 projects ($2.9 million) funded by the National Science Foundation (NSF). He has a remarkable streak of almost continuous funding from NSF since the first project in 1994. He has published over 225 articles and reports with over 60 refereed journal papers. According to Google Scholar, his publications have received over 2,000 citations including one paper published in 1994 with over 400 citations and nine additional papers with over 50 citations each. Pahwa, as major professor, has trained 32 graduate students –10 for doctorates and 22 for master’s degrees. His recent doctorate student, Ahmad Malekpour, who received the best GRA award from the electrical and computer engineering department in 2016, started his post-doctoral assignment at MIT in February 2016. Min Gui, a doctorate student, received the second place award for her research poster in the student paper contest at the IEEE PES General Meeting in Tampa in June 2007 in competition with 77 students from U.S. and international universities. He has served in many leadership positions in IEEE Power and Energy Society (PES) over the past 20 years. As chair of Power and Energy Education Committee (PEEC) of IEEE PES from 2011-13, he actively set new directions for the research and education agenda to advance electric power and energy systems worldwide. From 2012-15, he served on a prestigious IEEE PES committee for evaluation of new nominees for the Fellow grade of IEEE. He was an editor from 2010-25 of IEEE Transactions on Power Systems. He has served on the advisory committee of DistribuTECH, a premier conference focused on automation of power distribution systems, for over 25 years. He has traveled to many countries including Afghanistan, Cape Verde, Kenya, Nigeria, Zambia, South Africa, Morocco, Turkey, Germany, Sweden, U.K., Canada, India, Greece, Singapore, Philippines, Taiwan, South Korea, Australia, and Papua New Guinea for research and educational activities. He has received several awards over his professional career including the IEEE Power and Energy Society (PES) Douglas M. Staszesky Distribution Automation Award in 2012, IEEE PES Prize Paper Award in 2013, K-State College of Engineering Larry E. and Laurel Erickson Public Service Award in 2011, K-State College of Engineering Frankenhoff Outstanding Research Award in 2012, and Outstanding Alumni Award from Birla Institute of Technology and Science in 2014. He is a Fellow of IEEE.