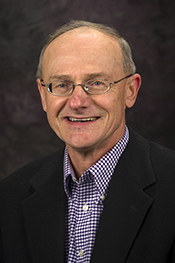 Professor Andrew Rys received his doctorate in electrical engineering from Texas Tech University in 1983. His doctoral dissertation topic included the design, fabrication and characterization of GaAs/AlGaAs heterojunction devices. He joined the faculty in the department of electrical and computer engineering at Kansas State University in 1983. In the summer of 1984, he worked at the SRDL labs in Phoenix, Arizona. In 1995, he was promoted to a rank of professor at K-State.

From 2011-15, he served on University Graduate Council, and on the Academic Affairs Committee of the Graduate Council from 2011-14. He has been the graduate program director for the ECE department from 2007 to present. Between 2001 and 2007, he held a position as a K-state faculty senator and was active on the Faculty Senate Committee on University Planning (FSCOUP). He was on the K-State Faculty Senate Executive Committee from 2006-07.

Professor Rys was involved in semiconductor research dealing with the epitaxial growth of heterojunctions of AlGaAs/GaAs applied to solar cells. He was a recipient of an NSF CAREER Award to study the laser annealing of III-V compound semiconductors in collaboration with Motorola Semiconductor Research Labs and the physics department at K-State. After that, he participated in a multi-year project with the department of chemical engineering on the charge carrier transport of wide band-gap SiC semiconductors and their thermal oxidation for future power MOSFET applications.

Current research interests of Professor Rys are in areas of low-temperature testing of CMOS circuits and the electrical, optical and structural characterization of AlN and BN thin films for optoelectronic and rf device applications and the device modeling. He has participated in several professional workshops in the areas of optoelectronics, semiconductor materials, and device technology and design; has published several papers in technical journals; and was awarded a U.S. patent.

Rys has taught courses in circuits and electronics, optoelectronics, solid state devices, VLSI circuit design and the integrated circuit design, devices and fabrication processes. From 2009 -11, Rys was involved with the World Bank Project with Kabul University in Afghanistan where he was responsible for the development of the engineering curriculum and labs at the EEE department at Kabul University.He has been active in the IEEE Electron Device Society and was a reviewer for Applied Physics Letters. Rys is a senior member of the IEEE Electron Devices Society and a member of the Eta Kappa Nu National Electrical Engineering Honor Society. He was a recipient of HKN Distinguish Faculty Award in the ECE department in 2016.