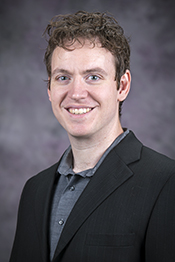 Mark and Brenda Brown Professorship in Electrical and Computer Engineering

After graduating from Kansas State University in 2006, Thompson traveled to Japan on a Fulbright Fellowship, performing research and language study. He completed a doctoral program under the mentorship of Jane Huggins at the University of Michigan focusing on non-invasive brain-computer interfaces. He then did a post-doctoral research fellowship under Cindy Chestek at the same university, working on implanted neural recording devices. In 2013, he returned to Kansas State as a tenure-track assistant professor.

Thompson’s research lies at the intersection of electrical and biomedical engineering. Most of his work is measuring neural signals (usually scalp electro-encephalogram or EEG), trying to guess a user’s communicative intent or emotional state. These technologies hold the promise to restore communication to the most severely paralyzed people, as well as add to the body of knowledge about everyone’s decision making processes. Additionally, Thompson works with other non-invasive sensing technologies relevant to health care, including load cells and film sensors for sleep studies. Currently, he is collaborating with Steve Warren, Punit Prakash and Bala Natarajan on an NSF grant studying sleep in children with Autism Spectrum disorders at Heartspring in Wichita, Kansas.

Thompson earned several national scholarships during his undergraduate and graduate studies, including the Goldwater, Fulbright and Nation Science Foundation’s Graduate Research Fellowship Program. Since then, he has authored or co-authored 14 conference papers and abstracts, 12 peer-reviewed journal articles and has his first co-authored book chapter in submission. He is co-PI on the National Science Foundation grant for the work with Heartspring, and has received funding from Sandia National Laboratory.