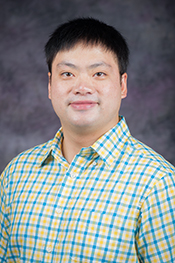 Hongyu Wu worked as a researcher at State Grid Energy Research Institute of China upon the completion of his doctorate. From Sept. 2011 to Feb. 2014, he was a senior research associate at Robert W. Galvin Center for Electricity Innovation at Illinois Institute of Technology (IIT), where he worked closely with Professor Mohammad Shahidehpour on research projects associated with smart grid and microgrid. From Feb. 2014 to Aug. 2016, he was a research engineer in the Power Systems Engineering Center at National Renewable Energy Laboratory (NREL), where he collaborated closely with universities, national laboratories, governmental agencies and private companies in the power and energy sector to optimize strategies for effectively interconnecting renewable resources and emerging energy efficiency technologies in the electric power system.

Wu’s research is to address the emerging technical challenges in electric power systems with systems engineering approaches that integrate technologies from a wide range of fields including, but not limited to, computer and network systems, communication engineering, cyber physical systems, control science, and mathematical optimization. His research interests focus on:

He is an IEEE senior member and has over 10-year academic, national laboratorial and industrial experiences in these areas. He was a key contributor to NREL’s Home Energy Management System (HEMS), a major technology advancement for the future smart residential energy hub. The HEMS technology was granted DOE software record and is now being adopted in many projects both in industry and national labs. Wu was also a key contributor to NREL’s multi-timescale stochastic power system operational models, which enhance ISOs/RTOs’ capabilities in dealing with various uncertainties caused by increasing amount of renewable energy resources. One of his publications related to his work was selected as Best Conference Paper in Power Systems Modeling and Simulation in 2015 IEEE PES General Meeting. He was also invited by Federal Energy Regulatory Commission to present his work in Washington D.C. Wu was also a contributor to IIT microgrid project. He is the reviewer of major IEEE Transactions journals in his research areas and serves in a number of technical review committees in universities, national laboratories and governmental agencies.