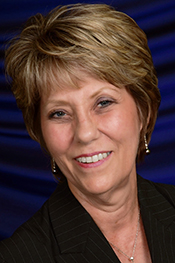 Ruth Dyer is senior vice provost for academic affairs emeritus and professor of electrical and computer engineering emeritus, having retired in 2018 after 35 years of service at Kansas State University.

Prior to her employment here, she was an instructor in the department of electrical engineering at the University of Kentucky and worked as the customer support manager for MicroSystems Engineering Inc. in Lexington, Kentucky. She joined Kansas State University in 1983 as an assistant professor in what was then called the department of electrical engineering and was promoted to full professor in 1997. She taught courses in the areas of linear systems, control systems and digital signal processing.

Since 1998, Dyer has held several administrative positions in the Office of the Provost, most recently serving from 2010-18 as the senior vice provost for academic affairs. In this role, she coordinated activities and initiatives related to university academic policies and procedures, curriculum and program development, and academic personnel. She also coordinated academic initiatives with the Kansas Board of Regents such as new degree-program proposals, collaborative programs with other regents' institutions, transfer and articulation processes, and distance-education issues. She also led several major university-wide initiatives such as the NCAA Third-Cycle Certification, University Campus Master Plan, North Campus Corridor Master Plan and University-Wide Climate Survey.  In addition, she directed the Dual Career Program, which provides employment assistance to partners of university faculty and staff, and she oversaw the Kansas State University Advancement of Women in Science and Engineering Office, which provides networking and support programs to women students and faculty members.

In her administrative work over the past 20 years, she provided extensive committee and leadership experience through her service on more than 190 university committees, serving as chair for more than 60 of those.

At the national level, she served as a Higher Learning Commission peer reviewer, 2008-15; and as one of the facilitators of the Women’s Leadership Network funded by the Sloan Foundation, 2008-10.

Dyer’s scientific and engineering research interests have been primarily in the areas of control systems, digital signal processing and biomedical engineering. Most of this research has been interdisciplinary in nature and she has worked with colleagues from several different departments and colleges at Kansas State University. These research projects have been funded by the American Heart Association, National Aeronautics and Space Administration, and National Science Foundation.

She also has led numerous outreach and engagement programs. In 1999, she obtained a National Science Foundation grant to develop outreach activities for girls in middle school. The resulting program was called Girls Researching Our World, or GROW, a program that continues today providing intensive hands-on experiences geared toward science and engineering.

In 2003, she received a $3.5 million NSF ADVANCE grant to enhance opportunities for women faculty members in science and engineering disciplines. At the conclusion of the ADVANCE grant in 2010, Dyer was a leader in creating the Kansas State University Advancement of Women in Science and Engineering Office. This office provides university programs for middle-school girls, undergraduate and graduate students, postdoctoral fellows, faculty and administrators. Dyer provided oversight to this office until her retirement from the university in 2018, but she is still active in providing guidance to its current programs.

Academic Highlights and Other Service Activities

Dyer was one of 36 individuals selected as an American Council on Education (ACE) Fellow in 2003–2004. During that year, she served at The Ohio State University in the Office of the President, Office of Academic Affairs Leadership, and Office of the Vice President for Government Relations.

In 2006, she was selected as on one of seven individuals from across the United States as a Fellow of the Association of Women in Sciences.

Dyer was elected a Fellow of the IEEE in 2008, with the following citation: "For contributions to diversity in science and engineering education, and Hadamard-transform spectrometers." She received the designation as an IEEE Life Fellow in 2019.

In 2011, she was selected to receive the IEEE Instrumentation and Measurement Society's Distinguished Service Award.

In 2013, she was selected for induction into the University of Kentucky (UK) College of Engineering Hall of Distinction, and she currently serves on the UK Engineering Dean's Advisory Council.